In the current year we are also celebrating the centenary of another great Argentine musician: Ariel Ramírez (1921-2010). Great pianist and prolific composer, he created a large number of musical works of all kinds, achieving world fame with some of them such as the song "Alfonsina y el Mar" (Alfonsina and the Sea), composed in collaboration with the writer Felix Luna.

Many adaptations of this beautiful work have been made for guitar, being currently a piece that many guitarists perform as an encore at the end of their recitals. In the concert organized by our association in 2013 in Badalona, the South Korean guitarist Daekun Jang performed it masterfully. We like to remember it on the centenary of its author:

The song “Alfonsina y el Mar” was first published, sung by Mercedes Sosa, on the album “Mujeres Argentinas” in 1969. In the photo on the left we can see Mercedes Sosa with Ariel Ramírez (at the piano). Standing in the background, Félix Luna.

The piece pays homage to poet Alfonsina Storni, evoking her tragic suicide in 1938, when she threw herself into the sea at La Perla beach in Mar del Plata, (the song, more poetic, says that she went slowly into the sea). Ariel Ramirez did not know Alfonsina directly, but she had been a student of his father, Zenon Ramírez, who told his son first hand the drama of the poet.

Born in Santa Fe, Argentina, on September 4, Ariel Ramirez was a great disseminator of traditional culture through an extensive discography and his performances in front of his own company from 1955 to 1980. His most important work is considered to be "Misa Criolla" formed by a remarkable set of inspired original melodies, based on regional rates of the Argentine and Hispano-American musical tradition. 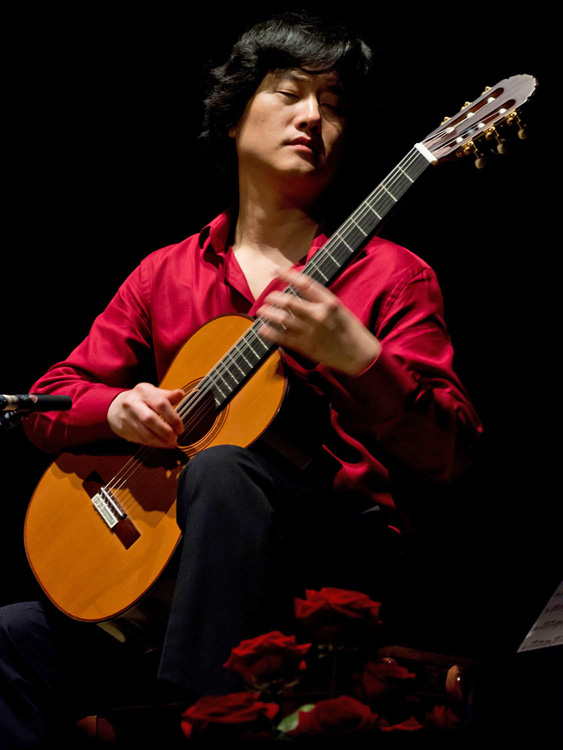 Daekun Jang began studying guitar at the age of 13 in Seoul, Korea. He later moved to Spain to study with Manuel González at the Luthier School of Musical Arts in Barcelona. It continued his studies with José Tomás in the Conservatory Superior of Music Oscar Esplà of Alicante, where it obtained the Extraordinary Prize. From 1997 to 2000, he continued his studies with the world-renowned guitarist Oscar Ghiglia in Basel, Switzerland and also studied bass with the lute player Peter Croton at the Schola Cantorum Basiliensis. He has attended seminars and master classes by Gustav Leonhardt, Erika Schneider, Hopkinson Smith, Gerardo Arriaga and György Kurtág.

In 2013 he performed at the Tatre Principal in Badalona, ​​in a concert organized by our Association. (CHRONICLE AND PHOTOS)

Go / Back to the Blog