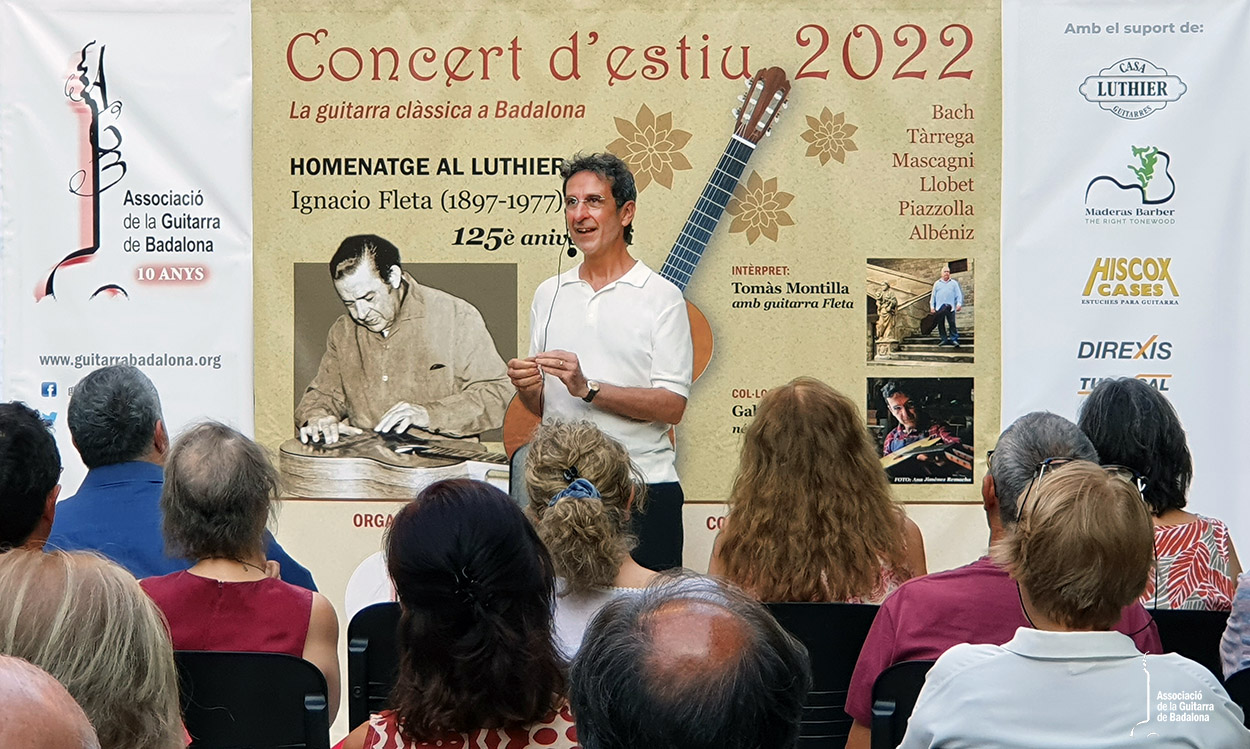 Among the audience there were personalities from the world of guitar, aware of the importance of the work of this Aragonese luthier who developed his career in Barcelona and who marked an entire era, but also fans and neighbors who wanted to enjoy a unique concert, in the open air, in the courtyard of the Central Badalona Neighborhood Association, a collaborating entity of this event.

The event also brought together a group of descendants of Ignacio Fleta with their families, who met again in this tribute.

In this relaxed atmosphere, after a brief presentation by the luthier Antonio Manjón, president of our Association, we learned about the main milestones in the life of Ignacio Fleta from the hand of his grandson, Gabriel Fleta, continuator of this family saga of illustrious luthiers, who also had to answer several questions from the audience. 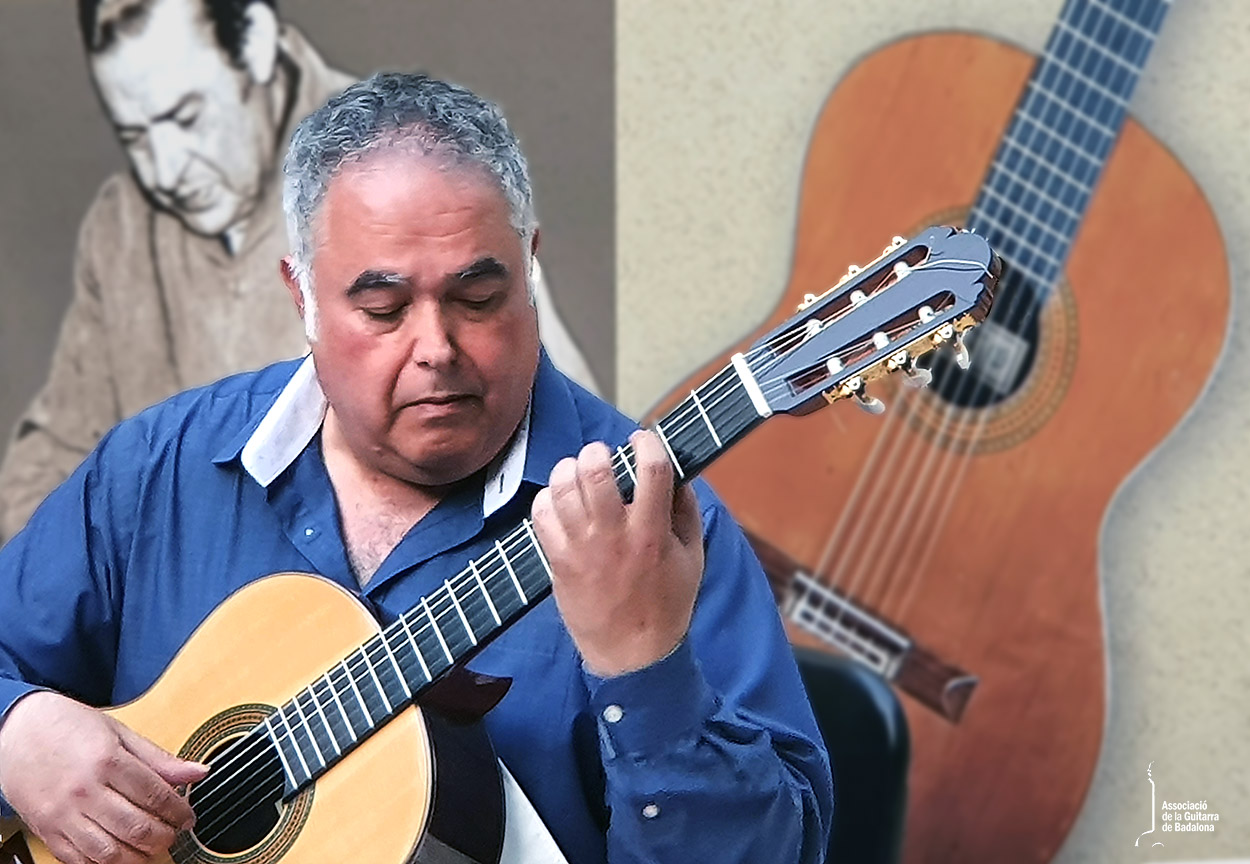 Next, Tomàs Montilla gave us a recital with two Fleta guitars, starting with Fleta number 998, with a cedar soundboard, and changing it mid-recital for Fleta number 1096 with a spruce soundboard. With these instruments he performed a range of works by different authors, styles and periods: Bach, Tàrrega, Albéniz, Mascagni, Llobet and Piazzolla.

With this act, the Badalona Guitar Association has celebrated the second of the three tribute concerts to great luthiers scheduled for this year. The next and last one will be the Autumn Concert that will take place in November.

Finally, we would like to show our gratitude to the Fleta family, Tomàs Montilla, the Central Badalona Neighborhood Association, the sponsors, and all those attending the concert.

Below you can watch a video-summary of the event. Although it lasted an hour and a half, the video we have edited sums it up in just over five minutes.

VIDEO-SUMMARY OF THE CONCERT TRIBUTE TO IGNACIO FLETA IN BADALONA:

Although this event lasted an hour and a half, the video that we have edited and published here, summarizes it in just over five minutes:

IMAGES OF THE EVENT: 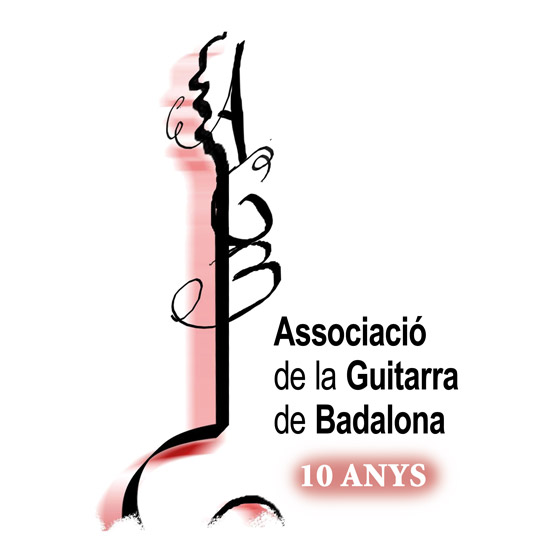 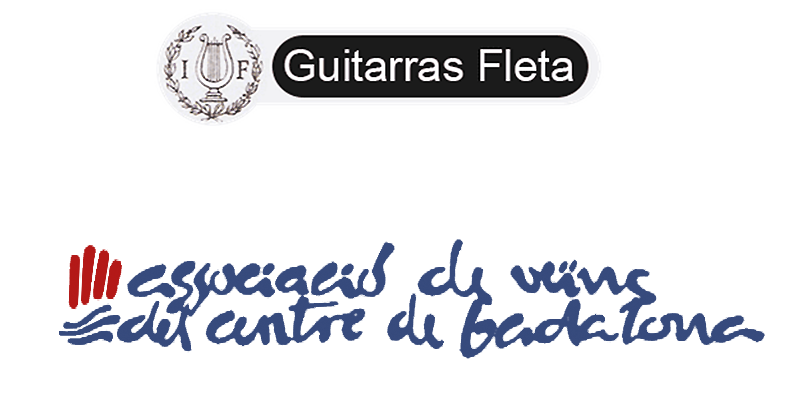 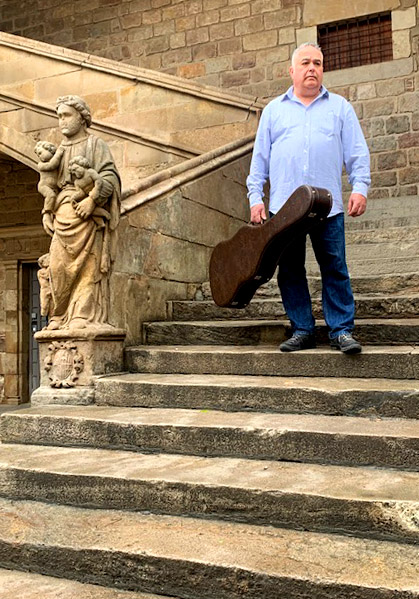 Born in Barcelona, he studied at the Superior Conservatory of Music in Barcelona with teachers Cesar Roche on guitar and J. Poch, M. Oltra, C. Guinovar, and J. Soler on harmony, counterpoint and history of music, graduating with a Superior degree in Music specializing in guitar.

In 1984 he premiered, together with C. Fernández, the work “Llums de Desembre” that A. C. Alabert composed for a guitar duo, at his request, and which was awarded in a competition.

In 1986 he was awarded at the “Mostra de Música per a Solistes i Grups de Cambra”.

He has performed in numerous concerts as a soloist and has been part of other instrumental ensembles.

He has composed works for guitar and has published several technical studies. 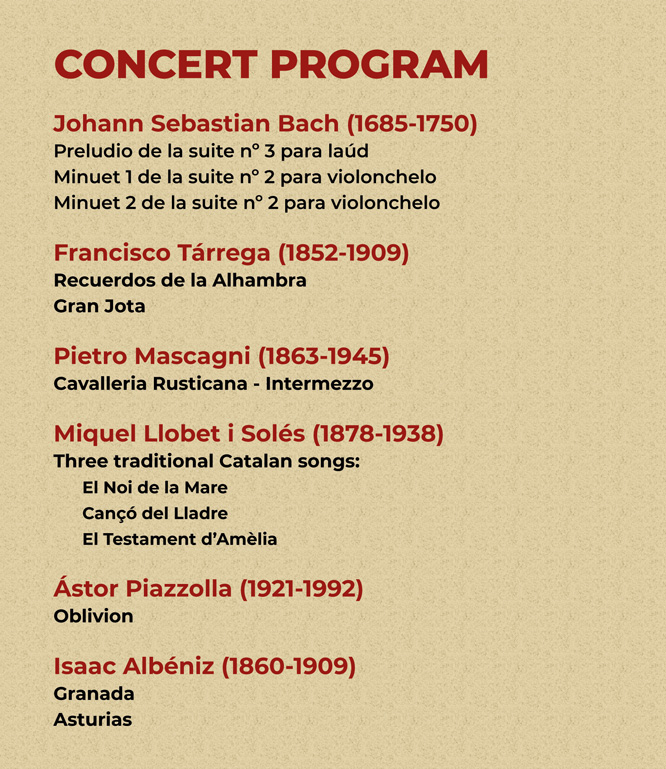 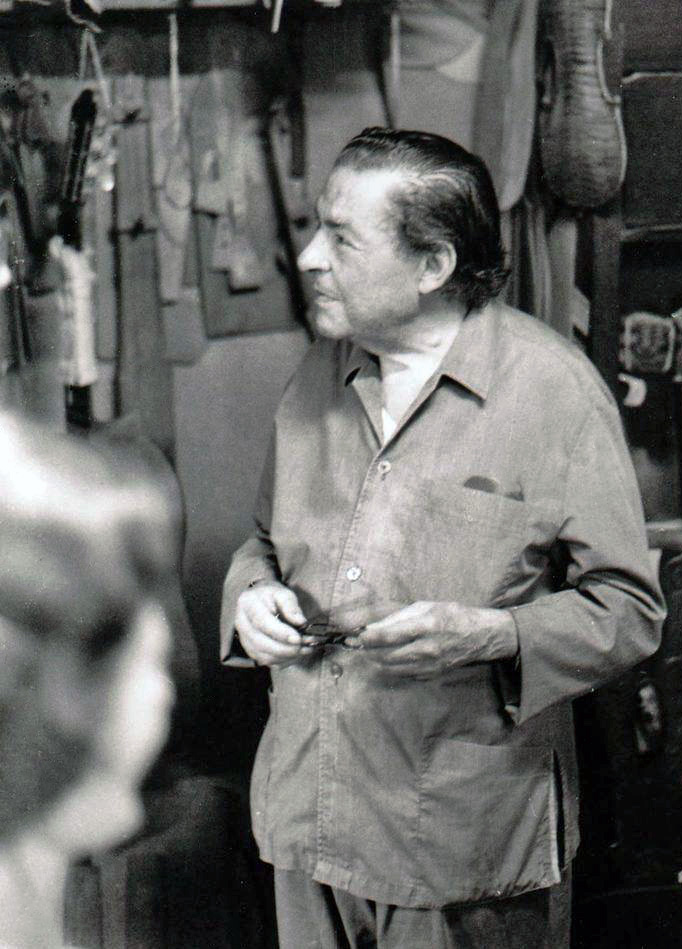 This Aragonese luthier, based in Barcelona, achieved great prestige in the 60s and 70s of the last century for the quality of the instruments he built in his workshop located on Carrer dels Àngels.

Added to his good work, was the fact that Andrés Segovia and John Williams acquired several of his guitars and played regularly with them, so his fame grow and caused the list of requests for Fleta guitars to increase so much and arrive up to 15 years of waiting time.

Fleta guitars became a true myth for lovers of this instrument!

Ignacio began learning wood with his father and at the age of thirteen, already in Barcelona, ​​he began his training as a luthier with his brother Francisco Manuel, with whom he opened a workshop in Valldoncella street in 1915.

He continued studying with Étienne Maire Clarà (1867-1935) who had also been his brother's teacher, and later in France at the workshop of Philippe Le Duc.

In 1927, he returned to Barcelona and opened his own workshop for the construction of string instruments: double basses, violas, cellos, some of them for Pau Casals.

Between 1939-1945, the vocal and instrumental ensemble "Ars Musicae" commissioned him to reproduce a collection of ancient instruments including violins, gothic harp, vihuelas, lute and modern guitar, with which he achieved a great reputation as a luthier.

In 1955, Ignacio Fleta heard Andrés Segovia playing Bach on guitar and he was so moved that he decided to dedicate himself exclusively to building guitars. In 1957, he received the order for the first of three guitars he made for Segovia, by which he achieved worldwide fame. 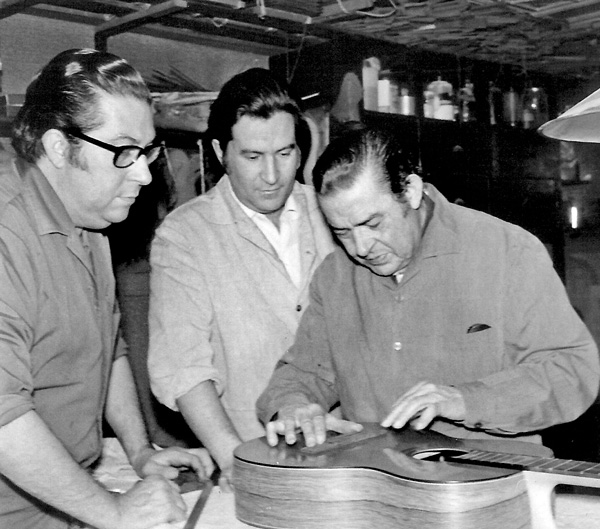 Currently, Gabriel Fleta, grandson of Ignacio and son of Gabriel, is the one who continues the family saga, maintaining the high quality of his instruments. 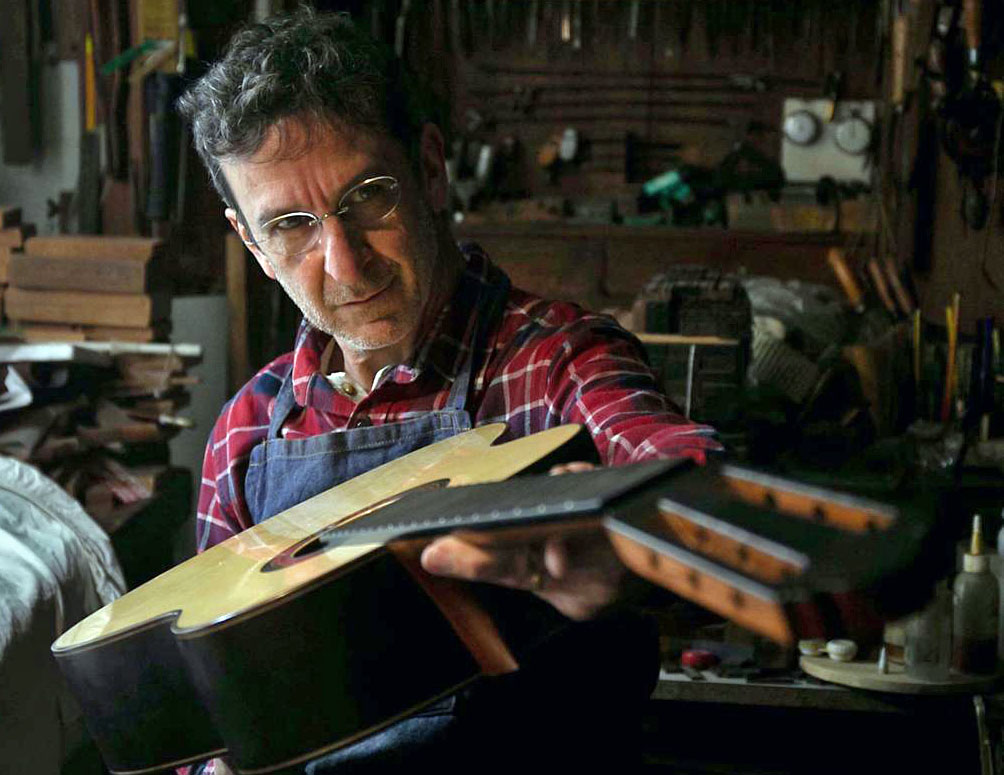 Born in 1963 in Barcelona, ​​Gabriel Fleta is the third generation of Fleta luthiers.

He learned the trade with his grandfather Ignacio, his father Gabriel, and his uncle Francisco. He started when he was 13 years old, during the summers. At the age of 17 he finished his first guitar, which he built with simple woods, following the instructions of his father.

However, he himself says that, in order to achieve the necessary skills to correctly carry out the entire process of building a Fleta guitar, he needed seven more years of learning and practice at the workshop, which he complemented with five guitar courses at the conservatory, which formed him as a musician and allowed him to better understand the needs of guitarists.

Today, Gabriel Fleta works in his workshop in the Barcelona neighborhood of Hostafrancs to continue perfecting the Fleta sound that Andrés Segovia fell in love with in 1955, keeping alive the family tradition of building high-quality instruments for the best guitarists in the world.